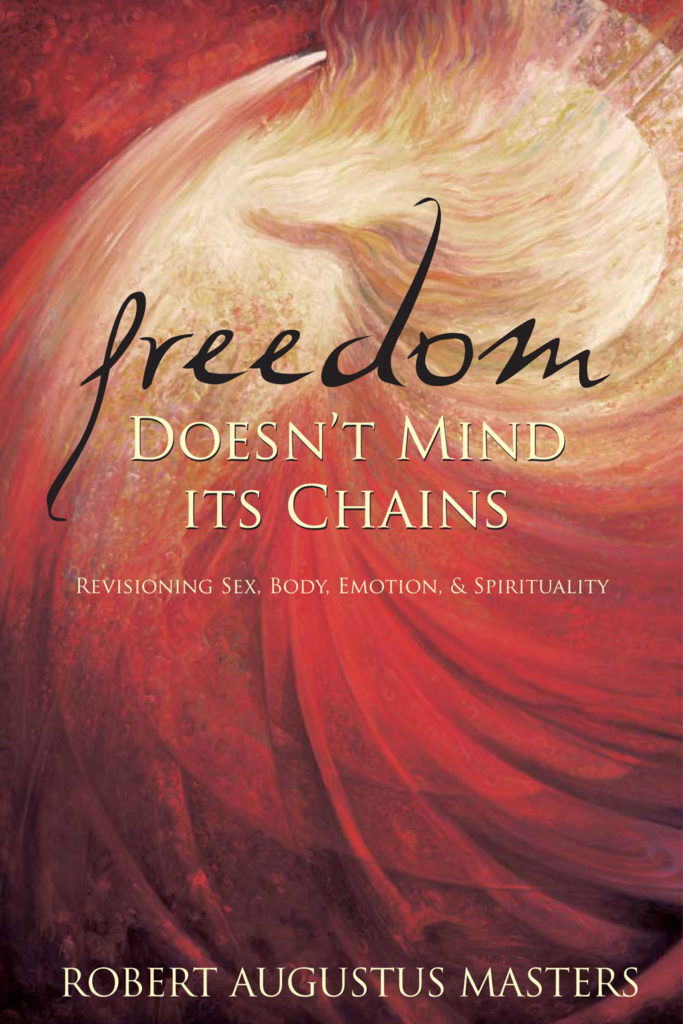 Revisioning Sex, Body, Emotion, and Spirituality(Out of print, but available through Amazon)

Freedom Doesn’t Mind Its Chains has as its core theme the development of intimacy with all that we are. Its approach is passionate, integral, deep-cutting, poetic. And its topics? Sex, body, emotion, spirituality, choice, freedom. Its chapters range from the nature of choice to the anatomy of guilt to the raw basics of awakened sex.

This book is a travel companion for deep journeying, inviting us to bring everything, including our suffering, onto the dancefloor. No wallflowers. In dancing with it all, we enter, and enter with more than our intellect, what truly matters.

Though I wrote Freedom Doesn’t Mind Its Chains back in the early 2000s — minus an editor! — I remain fond of it and its wild forays. It contains the basics of much of what I teach nowadays, including an extensive section on the body.

The Deeper Anatomy of the Body

When the body is no longer “down there” or “over there,” but is simply and obviously here, it is no longer just physicality or matter. It may seem the same perceptually, but if perception itself is looked at closely, its shows just as much insubstantiality as the very fleshiness and sensory input it purports to be perceiving. In becoming more aware of the actual process of perception as it is occurring, we approach the real nature of the body (and the mind) more closely.

For example, when — especially through meditative deepening — the seemingly solid, fixed image of an object (whether outer or inner) comes “unglued,” perhaps separating to some degree into individual “slides,” the only consistently observable reality is that of the flux and flow of manifestation. The Dance of dances.

Before stimuli are organized into the familiar, before pattern recognition has occurred, before sense has been made, perception is there to be recognized in its purity. Then, as it’s infused with our conditioning, the above-mentioned “slides” are connected in a sequential or sense-making manner to create a convincing illusion of solid, fixed objects.

The dance of reality-construction, level upon level.

On the few occasions when I have, while fast asleep, been conscious during non-dreaming sleep — a state in which awareness has no objects upon which to focus and no separative self-sense at the helm — I’ve witnessed the beginning of dreaming. Out of nowhere and nothing, colors spontaneously appeared, flowing in and out of near-forms, eventually assuming a three-dimensional feel, still with no discernible shapes, but nonetheless seeming to invite attention to come closer, to enter. If I — in the form of alert, undivided attention — didn’t enter, the scene remained little more than a nebular fluxing of color and shape-making, an impressionistic, frameless canvas, but when I actually did enter, a full-fledged dream quickly “surrounded” me, implicating me — usually in the “person” of my suddenly present dream-body — in its warp and weave. Loose but not so loose in the reality-constructing dramatics of dream-theater…

Perception may seem to put the body below, simply because our organs of perception (except for that of touch) all have a from-the-neck-up location. If they were located elsewhere, then we’d very likely view the world, including our body, from that locus. In short, perception tends to “locate” us, planting our sense of self somewhere behind the terminals of sensory input (and in the general area of the terminals of sensory translation).

This is why perception itself must at some point become the object of attention. Otherwise, we are simply sentencing ourselves to the apparent positionings dictated by our perceptual processes.

When hearing, for example, is consciously attended to — that is, when the act of hearing itself is given just as much or more focus than what is being heard — the presumption of a discrete, indwelling “hearer” doing the hearing fades and perhaps even vanishes, leaving only hearing and the simultaneous awareness of hearing.

At the same time, it is important not to underestimate the complexity of perception. Our sense of touch, for example, is not just a blank slate upon which the “external” world imposes a particular sensation. When a soft and a hard object, both of the same geometrical form, were pressed with the same force against a passive body surface, experimental participants were unable to distinguish them. When they, however, were allowed to touch the objects with the same contacting force, they easily made out which was which. This was not due to the activation of sensors in the skin, but rather to sensory messages from the joints involved in the required movements.

And there is more. When we touch ourselves, there seems to be just one sensation, not two — try it and see. In touching ourselves, the distinction between perceiver and perceived is far from solid. As the body itself is recognized to be both the object and the means of perception, the whole notion of an “I” running the show loses more than its credibility.

As “I” becomes less solid, less fixated, so too does the body, and distinctions between body and mind become less convincing. The more deeply we explore the body, the less and less body-like it seems to be — at least in a physical sense — and more arbitrary the location we give it seems. Yes, it is “here,” but just where is “here”? Is there really such a phenomenon as an independent, self-existing “here” with concretized coordinates?

No, except perhaps from the viewpoint of equally concretized “I’s.”

Like everything else, here-ness exists only in context, in relationship. What it is part of, and what is part of it, cannot ultimately be differentiated from it, regardless of the novelty generated through evolutionary “advances” to deeper and deeper (or ever more inclusive)

contexts. It is not enough to just state that the whole is greater than the sum of its parts; every whole is part of a greater whole, just as every part is a whole relative to its constituent parts.

So it appears that everything’s not just in relationship, but exists through relationship.

The web of interrelatedness — vast not just in span, but also in depth — has no truly discernible horizons, regardless of how diligently its supposed borders are patrolled. There’s more to it than we can imagine — no wonder we so readily cling to familiar territory. The Beyond that our minds shrink from is, as always, already here.

Investigation of what we call “body” reveals, among other things, that we do not end where the body ends. Life beyond description.

And is the body not only Mystery incarnate — the precipitated child of Light and Gravity — but also a revealer, a magnifier, a conductor of that Mystery?

Most months Robert sends out a newsletter, featuring his latest work offerings, plus an article by him.